Search for the Lost Manuscript BBC 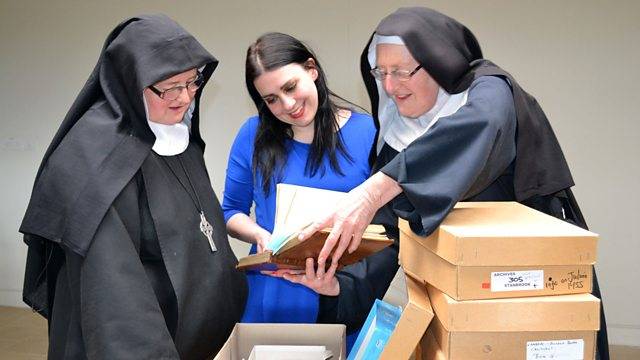 I had heard a number of months ago that the BBC were going to proceed with this delightful production and eagerly awaited a chance to view it when it finally went to air on 19th July on BBC4.

Being a Companion of Julian of Norwich for some years, I have read “The Revelations of Divine Love”, Julian’s book, a number of times and also quite a few of the other books written about Julian and her Revelations. I am delighted that new publications about Julian are still arriving, the latest being Father Robert Fruehwirth’s “The Drawing of this Love”.   Father Robert was for a time the Priest Director of Julian’s Cell at St Julian’s in Norwich and is now again resident in the United States with his family. He will be in the UK at the beginning of October. See the website’s Events Calendar for dates and other information.

Dr Janina Ramirez is our guide on a one hour journey to find the ‘Lost Manuscript’ and, even to those of us who know the story well, keeps our interest keen as she sets out on her journey. Commencing in Oxford where she attended university and first developed a passion for all things medieval studying medieval history, she reminds us that some people aren’t aware that Julian was a woman and her book was the first written by a woman in English. We are also reminded that Geoffrey Chaucer was around about the same time as Julian. Dr Ramirez interviews the former Archbishop of Canterbury, Rowan Williams, and he provides some delightful insights into Julian’s theology. I was delighted to be in Norwich in May 2014 for the Julian Festival when Lord Williams was the guest speaker for the Festival and his discourse on Julian was most interesting.

Ms Ramirez takes us on a tour around Norwich and interestingly reintroduces us to the River Wensum, an important part of Norwich life in the time of Julian and she also reminds us of the smells which were part of city living at that time, something we would be repulsed by these days in modern Norwich. It was also good to be reminded of the three episodes of the plague that came to Norwich in Julian’s time and which again, in the twenty-first century, it is hard to imagine how terrifying and tenuous life must have been at that time. We are also reminded of how people turned to religion in those times and also how the fear of eternal damnation would have struck terror into the hearts of the population. Janina talks with Bishop Graham James, the present Bishop of Norwich, about the roof bosses and other the medieval evidence in Norwich Cathedral; these also remind us how the Church preached fire and brimstone in those times. We are thankful for Julian’s words (which obviously would have been very controversial and contrary to the Church’s teachings at the time of her writing) that give us great comfort these days as she talks about God’s unconditional love for us.

We spend some time in Julian’s Cell at St Julian’s Church and Dr Ramirez points out the three windows that Julian would have had in her cell and their purposes.

Janina also visits Dr Sarah Salih at King’s College London who provides further interesting insights into Julian’s book. We are then taken on a journey to discover how Julian’s manuscript left England for France and how it was discovered by author Grace Warrack in the British Library as Sloane Manuscript 2499. Ms Warrack was the first person in the 20th century to translate the Julian manuscript into modern English. There have been many editions of the Warrack book through the 20th century.

All in all, a well thought through and presented Documentary that we hear has brought many people into the Julian Centre in Norwich to purchase more books on Julian.