Becoming a Friend of Julian 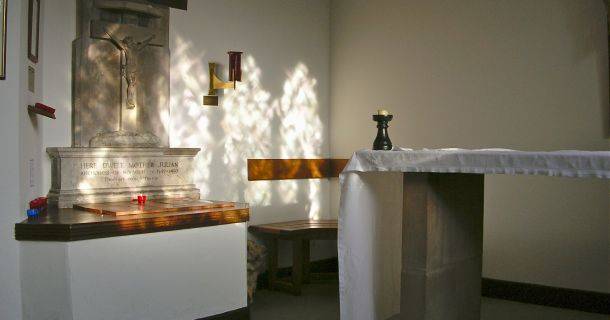 Being a Friend of Julian means joining in the work of the Friends in our calling to make Julian and the love and mercy of God revealed in Julian's Revelations more widely known. Julian herself was very aware that her writing of the Revelations was only the first step in an ongoing revelation of God's love. It would be continued by those who pray and reflect on her text, who share God's word and her writings with others, and who, inspired by God as revealed in her words, seek to develop compassion, love, and prayer in their everyday lives.

Many Friends live in Norwich and Norfolk, England; but many more live in other parts of the United Kingdom and in countries all over God's world. Men and women, ordained and lay, in the Church and outside of it, people who identify as Christians and those who don't, the Friends share a common love for Julian and a desire for her Revelations to become more widely known throughout the world.

If you love God, love Julian, or love humankind - revealed by Julian as being God's greatest treasure and delight - we invite you to join in our work. Friends offer an annual donation to support the work of the Friends: this website, hospitality around the Julian Shrine in Norwich, our learning programme, and events on spirituality and prayer. The minimum subscription is £20, and many donate more.